Modernizing the Use of Wind Power for Ships

Modernizing the Use of Wind Power for Ships

This column is an edited version of an article written for the July 2020 issue of the monthly magazine, Jointly Owned Ships of JRTT (Japan Railway Construction, Transport, and Technology Agency). I introduced a program that reduces the amount of energy consumed in the propulsion of ships currently in service in another column. This time, I will introduce measures to modernize the use of wind power.

The feasibility of adopting wind power for ships has been reviewed, and one of the background issues in modernizing its use is the evolution of material technologies. Technological choices for sails and kites to harness the wind are being widened thanks to the introduction of tough, lightweight materials such as composites and carbon fiber. Another positive development is that advances in I.T. and control technology allows more precise control, such as weather routing, route analysis technology, and automatic sail control, and enables the more efficient conversion from wind to propulsion power.

Wind power propulsion systems currently under development take various forms, including not only traditional soft sails, but also hard sails, rotor-type sails, and kites that tow the vessel. Its Greenhouse gas (GHG) reduction effects change according to ship type, propulsion system, route, season, and weather, but there is also a pro forma analysis showing that GHG emissions from ocean-going vessels can be reduced by more than 20% under various conditions. The main engines on many coastal ships have only half the horsepower, or even less, of those on ocean-going vessels, and additional horsepower by using wind power becomes a higher portion in ship’s horsepower, so there is considerable promise for reducing emissions from engine operation. On the other hand, many coastal ships have space on their decks that make it possible for them to use wind power, so the proportion of wind power could more than double relatively. That means, assuming that GHG emissions from ocean-going ships can be reduced by 20%, those from coastal ships could be reduced by 40%.

When we talk about wind power propulsion, what probably comes to mind is a sailboat using tailwinds only.

Figure 1 shows the mechanism of an aircraft wing. The diagram of sail propulsion during a crosswind in Figure 6 shows almost the same conditions. Please understand that the latest basic mechanism for using wind to power a ship is the same as an aircraft wing.

In particular, wind at right angles to engine-powered ships causes a deterioration in fuel efficiency because it requires leeway sailing and counter-steering, but if a sail is used, the wind can be converted to forward power.

Figure 2 is a polar diagram that shows the performance of the sail training ships Nippon Maru and Dar Mlodziezy. The radius shows ship speed, which is a percentage of wind speed, and the outermost side shows that the ship’s speed is produced at one-half of the wind speed. The more streamlined Dar Mlodziezy hull generates around 60% of the wind speed when the wind direction is 80 ~ 130 degrees. This means, it can achieve a speed of 18 knots in a 30-knot (about 15m/s) crosswind. It shows that a tailwind does not have the generally expected effect, because its wind speed relatively weakens by ship’s own speed.

A large energy-saving effect can be expected in coastal shipping if a certain route and seasonal wind patterns can be matched.

Research conducted by Maritime Credit Corporation (now Japan Railway Construction, Transport and Technology Agency (JRTT)) in 1986 reported the analysis of three-year operation track records of four ships equipped with sailing systems — the Shin Aitoku Maru/Aitoku Maru (699GT tankers) and Senyo Maru/Nissan Maru (699GT cargo ships), showing that the horsepower gain from adding sails was 10% in summer and nearly 20% in winter, based on an average of all voyages.

These coastal ships were constructed about 40 years ago when bunker prices skyrocketed after the Oil Shock, but later the prices stabilized at low levels, so the sailing system has not yet been widely adopted.

However, it is considered feasible to expand the number of coastal ships using wind power if sail systems are improved by making full use of today’s cutting-edge technologies.

3. Modernizing the use of wind power

3.1 Ship with a wing-shaped hull

Let me introduce the optimal shape that maximizes propulsion force by using the principle of generating lift (mainly leading-edge lift) if the hull serves as a wing during a diagonal headwing. Mitsui O.S.K. Lines, Ltd. (MOL), Akishima Laboratories (Mitsui Zosen) Inc., and our company have developed the pure car carrier (PCC) shown in the lower part of Figure 3, which converts wind energy into propulsive force. Please refer to another column for details on the development.

Figure 3 shows that significant resistance occurred on the current ship due to wind pressure in the upper image, but the lower image shows a significantly smoother flow around the hull of the improved type, which has lower wind resistance, especially on the starboard side of the bow (the hull is clearly visible in the image), and as a result, a wide range of negative pressure occurs, creating propulsive power rather than resistance.

One of the hard sail research initiatives in Japan is the next-generation sailing ship Wind Challenger project, an industrial-academic partnership led by The University of Tokyo.

Thanks to the shape of the hard sail, it offers superior efficiency in converting wind into propulsive power in comparison to soft sails such as those used on sailing yachts.

Figure 5 shows the bulker that MOL and Oshima Shipbuilding Co., Ltd. took charge of the project after that and are moving ahead with plans to install the sail on the actual vessel.

Figure 6 shows how to operate the sail. Resistance to headwinds is reduced by completely lowering the sail. Other angles are automatically adjusted to gain propulsive power. The sail is automatically lowered, lifted, and changed angle by measuring factors such as wind direction/speed and stress on the mast base. 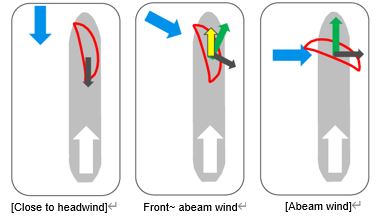 With regard to other types of hard sails, Wallenius Marine (Becker) plans to realize a PCC with foldable sails (Fig. 7) in 2022 or later. These can be folded in half vertically, and the entire structure is retractable.

Eco Marine Power Co., Ltd. in Japan has developed a hard sail system in which many relatively lower-height sails are installed, and solar cell panels are attached to the sail surfaces, as shown in Figure 8.

Soft sails have also been improved. Figure 9 shows the DKSTRA N.A. 106m-long, large-scale yacht, which was launched in 2018. It adopts soft sails, but these are extended along with the wing-shape frames, so this is expected to generate performance comparable to that of hard sails. It is said that the maximum speed is 17 knots.

The “cylindrical sail” gains propulsive power with the Magnus effect as the wind turns the cylinder of a rotor vertically installed on the deck. This type has drawn increasing attention lately. It works on the same principle as a baseball pitcher throwing a curveball when the ball curves because of its rotation. Please refer to Figure 10. And please refer to another column on this type of sail.

Finland Norsepower cylindrical sails have been installed on ferries, RoRo ships, product tankers, and so on.

The adoption of the seawing has also been under consideration. Airbus spin-off company Airseas developed a seawing system, and Kawasaki Kisen Kaisha (“K” Line) decided to equip a Capesize bulker with a 1,000m2 seawing. (Fig. 12) They said that it could reduce GHG emissions by 20% by receiving wind from high altitudes, where wind speeds are higher. In addition, the seawing has issues with deployment and retraction during ship operation, but it is designed to automatically deploy and retract the using a mast on the bow. The seawing makes a large turn in a figure-8 shape to generate high speed. With the kite (seawing) functioning as a wing in this way, the vessel gains significant propulsive power.

Current sailing systems, in both large and small sizes, use the principle of the wing. Wind flow speed may increase on the back of the wing, and the flow may be disturbed and separated on the tail end of the wing. This is called “stall” if it occurs with an aircraft and may cause a dangerous situation by reducing lift.

An air intake port is installed on the tail end of the wing to prevent a stall. (Please refer to Fig. 13; wings can be folded into a 40ft container). Experiments on the suction wing, which uses this principle, have been underway for practical use.

Figure 14 shows an example of the suction wing units installed, with two Econowind sails on the bow.

A disadvantage of using wind is that it makes the vessel literally “fully dependent on wind,” and there is a limit to the accuracy of forecasting and analysis. With insufficient wind, a vessel may lose speed and be unable to maintain its schedule. If completely wind-powered ships are in practical service, a shift in the business model would be needed because of the difficulty of providing regularly scheduled vessel service. Therefore, a more realistic approach is to use wind power as an assist, in combination with engine propulsion. In addition, a system must be developed to include wind power in the energy efficiency design index (EEDI). 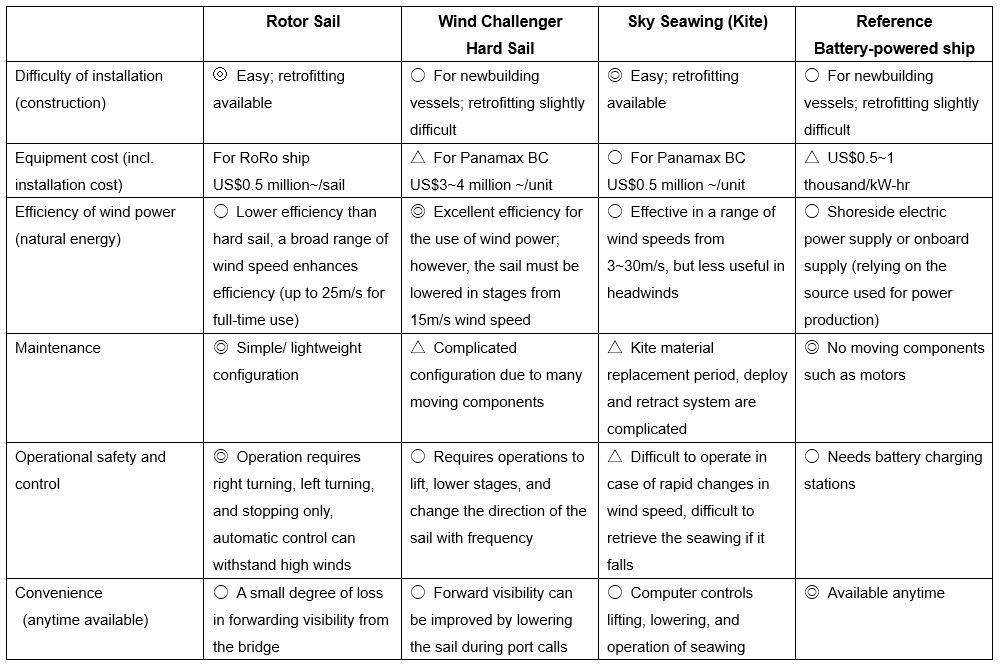 Chart 1 shows an outline of the pros and cons of the main wind power systems in the above three chapters. In addition, the use of wind power and batteries can complement each other. In the case of the coastal ship Aitoku Maru, which put wind power into practical use, the horsepower was reduced by over 50% on some days. In such cases, I think that electric propulsion (diesel + batteries) ship is more suitable when using wind power as auxiliary propulsion because the main engine does not have to operate under a low load.

In another column, I introduced a case in which a ship currently in service can be operated with reduced energy (i.e., energy losses are cut by one-third)

I think we can show the way to further reducing GHGs by adding the use of natural energy. Therefore, I introduced the latest technologies to using wind.

Other natural energies besides wind include wave power and solar power, but the use of only one or the other does not provide sufficient propulsion for a large-scale vessel. However, it is important for the ship to reduce GHG emissions by 20%~30%, and using natural energy is key to decarbonization. The adoption of wind power is especially promising.

I think we have the potential to transport cargoes with half of the energy used by currently operating vessels, if we start reducing energy waste on the vessels and using natural energy.

From there, I think we can continue to move toward the optimal use of GHG-free fuels such as hydrogen and ammonia and so on.